The Rise of a Participatory Culture

The Rise of a Participatory Culture

One of the observations about the current technology landscape is that people are no longer passive consumers but active participants in the advancement of tech-based solutions. They are continually sharing information about new technologies – either information that they have learned from reading about these innovations or through directly experiencing them.

What is certain is that people today are far more informed than the previous generations, more comfortable with technology, and more eager to share their experiences and opinions with whoever is interested in hearing them. One needs to look no further than YouTube, where user-generated how-to demos, unboxing videos, as well as product reviews are prevalent.

As the pool of tech-savvy end-users grows, they begin to contribute to technology’s evolution directly

They become part of the innovation process, either through spreading the information* or by reimagining unexpected usage applications for the existing technologies. These individuals are taking on the role of innovators and early adopters on Rogers’ adoption curve. 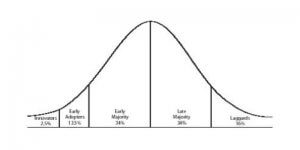 This observation raises two questions about Roger’s theoretical model. One question is about the relative size of the innovator and early adopter segments. The other issue concerns the shape of the adoption curve.

Traditionally it is estimated that innovators and early adopters**, together, account for about 16% of the population. This approximation is based on the classic adoption curve which is assumed to be a normal distribution.

However, as the factors influencing the diffusion process continue to evolve, and as the role of people as social actors within this ecosystem changes, one might hypothesize that the shape of the adoption curve is more right-skewed rather than symmetrical. Furthermore, the relative proportion of the two segments might be higher than 16%.

**   The definitions of the segments are taken from Everett M. Rogers’ Diffusion of Innovations:

Innovators are heavy consumers of media and actively look for information about new developments and innovations.

Early Adopters are influenced by the innovators and like to be the first to try the latest gadgets or services.

Early Majority are not opinion leaders but typically have larger networks (compared to Innovators and Early Adopters). They will adopt the new technology before it goes mainstream.

Late Majority will adopt the innovation only when they have to (out of necessity) or when it makes economic sense.

Laggards are resistance to change and are the last group to adopt (usually at the point when the new technology is no longer considered new). It is important to note that Laggards may include some super Innovators (people who are holding off on the new technology because they anticipate the next ground-breaking innovation).

For more information about the groups, refer to Chapter 7: Innovativeness and Adopter Categories in Diffusion of Innovations.